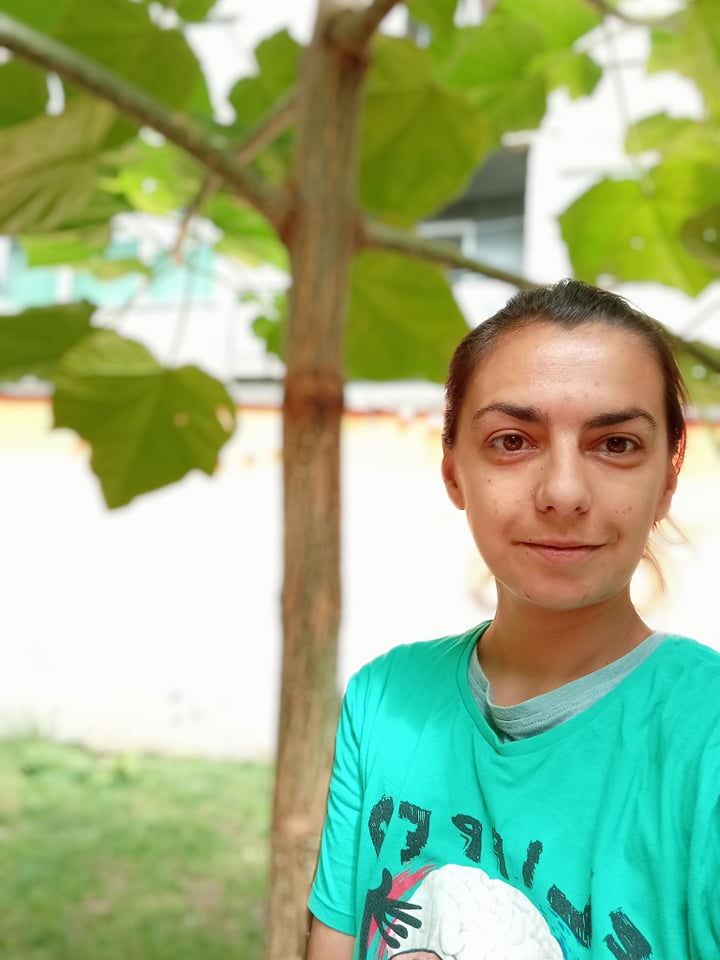 QA: Sabina, where were you born and where did you grow up?

SABINA: I was born and grew up in Tuzla, and I had lived there until I was 32 and moved.

QA: Can you tell me a bit more about your childhood and would you share one of your happy childhood memories?

SABINA: Well, yes, of course! One of the happiest moments I remember was when I was about to start elementary school so my mom got me a present. She bought me this double deck cassette recorder so I could record music and use it for studying. I was super happy!

QA: We’ll move forward in time to your early teen years. Can you share how you started exploring your sexuality and gender identity?

SABINA: Well, here’s the thing. I was seven when I was attracted to same sex for the first time. So, basically, I kind of knew it and I didn’t suppress it at all. It’s just that I didn’t have the right moment where I would, you know, meet the person who would totally activate that part of me. And then by 16 or 17 I had all these teen crushes; I travelled a lot. I realized what I wanted and what I liked in my later years.

QA: Can you tell me about the environment – could you come out to your friends and how did that go?

SABINA: Well, kind of. I mean, I travelled a lot and I had friends, team mates. I was training karate and we were travelling all across Europe. Basically, we were amongst the blessed ones who could go out earlier and relax. While here, it’s all…I mean, nobody talked about it here. There was this one situation I remember. It was at this tournament I couldn’t go to. So, my friend had gone and she came to see me later. And she said that this girl had been there who had approached her and they had a really nice time. I was really happy for her, I could talk to her about those things, I think we were 16 or 17. You know, that it’s fine, totally okay, to feel you’re not doing anything wrong. So yes, there were people I could talk to, but only with super close friends. You couldn’t talk about it everywhere, I mean, like, in a coffee place or something…

QA: So, does the concept of a community have a changed meaning for you when it comes to time? Has it been changing since you were a child, before the war, during and after the war, and now?

SABINA: As a child I used to think of community in terms of being home, with family until I started growing up and making friends and finding common language, spending time together and looking after each other. I really felt great that I had friends who could understand me and who were there for me. Later on it was different, it changed… You know, before when you couldn’t talk about it publicly, it was all in the background, hidden – and we were closely knit together then. I mean, there was no violence within the [LGBTIQ+] community, I mean, it seemed less, because we held onto each other. For example, your parents find out and you have a place to go in the community. It was much better before. I mean, you have that today, but it’s different now that the atmosphere is much more liberal. I have to say that many things have changed, people can talk about it, discuss it, go to Pride, I don’t know.

QA: Are you saying that there is more violence now? What do you think is the reason?

SABINA: I think the reason is that people started coming out more, they’ve started taking the weight off their chests, they kind of overcame that, leaving the trauma behind. And then they have more space to make some stupid things, like, being jelous. It’s like a force, if you like. If one doesn’t have the space and doesn’t fight for the public space, like one’s share of the space, but then the person is fighting for survival. Bare survival and I guess, elbowing your way up, literally. Knocking people down. The respect is gone, I’d say it’s gone.

QA: Can you tell us how much support do you have within your core community? What do you need to feel safe?

SABINA: Well, steady and full-time job as the first thing. But when that’s missing, then I’ve got people who provide psychological support. But I’ve got people who’ve helped financially. It’s this context of pandemic now, many people have lost jobs. But safety means that I have whom I can trust above anything else. In time and during all these years past, like, you’re making these cuts in life; you say: Okay, now I am taking this road, and then these people are on the same road. So, there’s no bigger collide. We think pretty much in the same way.

QA: How much space is there in BiH and in Sarajevo, where we live now, for the queer community?

SABINA: Of course, there’s space, but the community needs to show some consideration and take steps gradually. People [within the community] are prejudiced from the start by talking to some other people. Like, they have negative experience just because of some different opinion on queer or LGBT community. And then, through years long conversations, hanging out together, those [outside of the community] change their attitude and soften and then they give you a lot of support in life. You can’t make things happen overnight.

QA: Do you think face-to-face contacts have the most influence on forming one’s opinion, attitude and raising awareness?

SABINA: Well, yes, face-to-face contacts and if people are aware at least to some degree so that they can look at the world around them and that they can communicate openly and directly to each other. You know, like, you’ve got media and all these headlines and then somebody forms an opinion based on the headline, I mean, that’s not even close. People should talk! It’s a bit limited now, given the pandemic and everything. I personally haven’t got it, I am not afraid of Corona and I don’t think it’s dangerous, but people have had some situations where they were affected, so the effects and all of that is still unknown. The worst thing is this media image and then you don’t know how to behave in this situation.

QA: How has your life changed from the beginning of the Pandemic?

SABINA: Well, I really have to say that it’s changed for the better. I am now more aware and present here and now. And I see things objectively, I have become more connected to people whom I had been close with already. So, we’re even more connected and there for each other now, like, if you need anything or if you need help, just call. We’ve reconnected again. I guess it took the Pandemic to happen so people would be closer to each other, though they keep telling us to practice physical distancing.

QA: It’s interesting that when we were talking about violence within the community and how you said that people cared more for each other when we couldn’t go out in the public, when we had more violence targeting us from the outside. So, I had this association that we were more connected within.

SABINA: Yes, correct. Somehow, instead of becoming gentler, there’s still this unnecessary rebellion in some places. We’re missing more of emotional intelligence as to recognize the moment when something should be done, and avoid doing something at every cost. We forget to talk, dialogue is the best solution, to sit down with a person and talk normally, tension free, just pure common-sense dialogue.

QA: Sabina, you have been an activist ever since we’ve known each other. Could you share your thoughts on your activism, how did the resistance look like and what’s happening now?

SABINA: Well, yes, many things have changed now in activism with all this technology. It kind of gave protection to activists in a way, but when direct action needs to be done, one has to take it to the streets, come out there, you have to show it and raise your voice. But the digital platforms have also helped where you can send your message to the general public in a clear way. However, if things are not changing, you always have to show it verbally and publicly, I mean, in the streets as well. I always support any kind of action if we want to change some things. Now, it would be good if a revolution happened here, at least if we could remove the current political leaders in these elections. That would be a ray of light…

QA: Do you believe it’s possible?

SABINA: Yes, I’m hopeful. It takes like three angry politicians who’d draw the line, in a positive sense. Like, if one would say, I see my neighbor suffering, a man who had worked his fingers to the bone for 40 years, earned his pension and can’t make a living from it, he’s not getting the amount he’s deserved. Or, on the other hand, let’s take killing dogs for example, or exploitation of everything… I just hope they’ll turn up, at least one for ecology, one for social care and issues and one strong manager on the head of the state.

QA: Well, Sabina, I hope so. Those wishes are very nice.

SABINA: I think we have people like those, but this huge nationalist organization is like an octopus, it’s so hard to remove them. But I think it’s doable and feasible, I really believe it can.

QA: At the very beginning you shared one of your childhood memories about the cassette recorder. Now, I’ve known you through music as well, so what does the music represent in your life and how do you nurture that feeling within?

SABINA: Music saved my life! In the hardest period of my life I decided to take on djing. I’ve been listening to so much music, I’m like a little walking music archive! So, basically, I wanted to share that energy I feel through those sets and playlists, to give it to other people and it’s mostly a positive emotion. I think music means something to everyone. To me it means a great deal, if I didn’t have it…I don’t know what would happen.

QA: Do you have some message, a guiding principle of your own that you’d like to share for the end of this interview?

SABINA: What guides me above everything else is to try and use my common sense to assess life situations and not be afraid. As long as you’re fearless, you can do so much, whatever you imagine, everything is possible! To pursue a career in a job you really love, partake in activism and above else, be a good person.

This story is part of a series of personal stories of LBTQ women about relationships, identities, sexuality and gender, feeling of belonging, creativity and work. Persons from the community share their thoughts related to these questions reflecting on the period before, during and after the war, as well as the current COVID-19 pandemic. Initiative supported by Feminist Review Trust Fund.