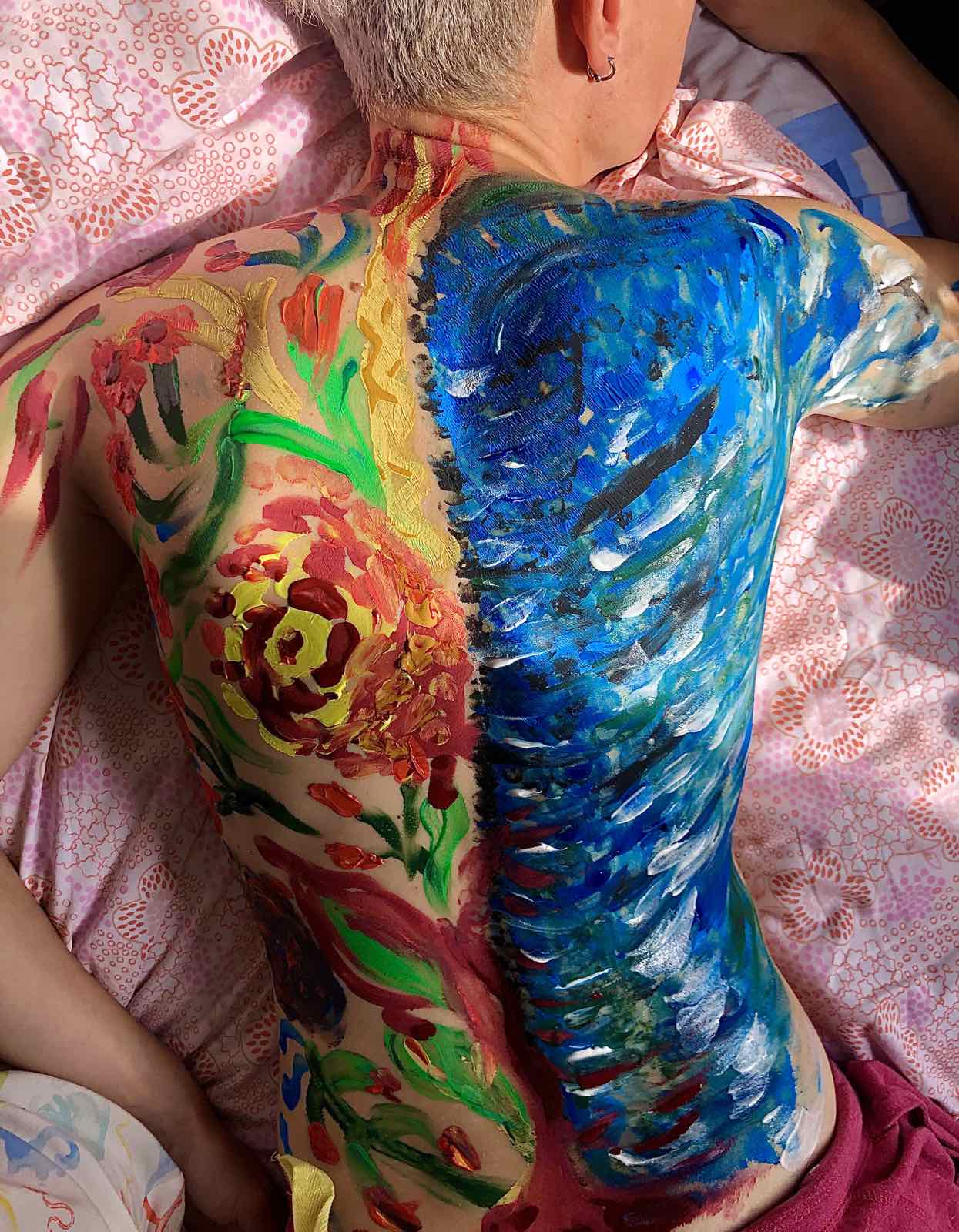 QA: To start with, where were you born and where did you grow up?

Luna: I was born in Italy. Most of my life I’ve been living in Sarajevo, B&H. I went to highschool and university here. My parents are from Sarajevo. So, as a family, we’re all here.

QA: Could you tell us about your childhood and do you have some happy memories you’d like to share?

Luna: Well, I don’t know. I had a really happy childhood. My parents allowed me to do what I want, to practice sports, do art, take dancing classes, ski… So, I really had a great childhood and all those activities kept me really busy, though I did attend public schools where I didn’t feel so great. I mean, when I was younger everything was amazing until the period of high school when I realized what and who I am.

QA: Great. That makes our introduction for the second question. How did the process of questioning and discovering sexuality look like for you?

Luna: Well, I think it started…Maybe I was in the fifth or sixth grade of elementary school when I started noticing that something is wrong with me. Like, fuck, how come everyone has a crush on someone, it’s a big thing, we’re learning about it, we know how kids are made, like, what is wrong with me. That feeling lasted until the Internet came. (laughs) So, then I googled and googled and realized, ok, there are more people like me. Like, I don’t really know who “we” are, but at least there are more of us, I am not the only one. It was comforting. And I remember, in my eighth grade, or when I was about to enrol high school… Ok, so, I was in private school, like, women-only school, and I found that amazing, it was then that I realized, wow, whis feels really good, thank God boys are not around, and stuff. So, I think the Internet and going out…I mean, I started going out to some, let’s say, more urban places and I started noticing, “they” are here, well look at this, check this out. I started dating for the first time, having first girlfriends…but all that time I was pressured by my mom. It was throughout the high school that she started pressuring me with all these questions, how come you don’t have a boyfriend, get a boyfriend and until my senior year that turned into: You can’t go out without a boyfriend. So that’s how I got one of my gay friends, and then another one, and then the third one, to pretend they’re my boyfriends, for my mom, I mean, for my parents, I had to. That’s how it went on. I think the Internet was the key thing (laughs). If it weren’t for the Internet, I have no idea what would have happened.

QA: So, tell me, if you’d like to share that as well, how do you feel now and what is your relationship like with your mom, parents? Are you out to them?

Luna: Well, look, I am out to everyone. I think the entire family knows. When I came out to my mom, she told everyone. My parents are divorced, so when I came out to my dad, he was like: I knew it. What about it now, so I’ll ask you about girls now. I had asked about boys before, because everyone does that so…With my dad it’s great. He met all of my girlfriends, while mom is kind of… I mean, now, after… What, it’s been five and a half years since I came out to her. I was 18 or so, okay… so it’s been almost six years.  Right, so, it was a terrible experience. Now, even after six years she still has these moments like: “A woman is expected to give birth, it’s one of the most important things. Just do that and then you can do whatever you want.” That’s where she is at. And then another day comes and she gets carried away and says: “I know you will not be happy here.” So, I don’t know what to say, I don’t feel the pressure anymore because I don’t live with them anymore. We can’t talk about it and we don’t talk about it. So I don’t allow her to violate my boundaries because she is not entitled to. So, that’s our relationship. We talk more about the weather.

QA: Tell me this. What does the community mean to you and do you have a community of your own? Has it changed throughout the time in the process of your growing up? Do you feel supported and safe?

Luna: You mean, like friends or that kind of circle?

QA: Well, what makes your community, if it’s friends, then, that’s it.

Luna: Well only through friends. Of course, I had friends that I stopped hanging out with when I came out because they had this attitude: We thought you were messing around with it and you are serious about it, so that’s sick when you’re actually serious. Like, when you’re kidding it’s okay. I mean, there were friends, I say they are not friends, but they are people who obviously had to leave from my life. As for the other ones concerned, like those closer to me, they were all super supportive. I mean, and then I have a circle of friends, of course gay friends, so yes, that’s the community. And I didn’t have any support from anyone in my family, that includes my uncle, aunt, my stepfather, grandma. No support whatsoever. Everyone was like, take it easy, you’ll change your mind some day or you’ll be cured, like, you’ll learn it the hard way. And as far as the queer community, I know that there was, I mean, there still is, Open Center in Sarajevo, but I’ve never contacted them because I just didn’t see them doing something directly, or that someone whom I met was…There were disgusting forceful outings, I mean, you hear rumors, you meet someone and. I don’t know if they had helped someone in something specific, or that they did something directly, so I thought, I don’t need this. I used to go to therapy, I had a therapist, but I didn’t need that type of support.

Luna: Well, yes. Somehow, ever since I was a little girl I have been drawn to the spiritual side of the world. I knew nothing about politics, until I met my ex girlfriend. Like, we have three presidents, FYI. I was always into my art, my designs, and then also yoga, meditation. All of those things have helped me go through the process of not being accepted. At first it was because my parents are divorced, then my dad is of another religion. And then you need to go through all of those things. Had there not been for those activities, I have no idea where I would have ended up. I don’t think it would have been easy. So, those are the things I love. If I could choose, I would choose this way, these things. I would never live some 9-5 office job kind of life. If I could choose, these things would be it.

QA: As this is a surreal time of living in this pandemic and all these various measures being practiced, can you tell me how this pandemic has affected you, your life? What has it affected?

Luna: Well, somehow, when you’re in those spiritual waters, the meaning of this is anything but virus. This year turned out to be really great for me because some things that were supposed to end are now over, something new has started. A lot of things have changed in my life. I liked being under the lockdown, I was in the house, dealing with myself. I mean, it was really good, I didn’t have to go anywhere, I would read for hours. Somehow you value your time more, you see how much you had missed those things before so you turn to yourself. I think it was more like a lesson, maybe I should give myself some time more often and love myself more. So I don’t know, I don’t think I’ll ever forget this year because it somehow had a very positive effect on me. Of course, there is this chance, like, you’re afraid for your loved ones, that they might get sick… I don’t know, we have an older grandmother, she’s sick, and like, that’s what you’re afraid of, but other than that, I don’t know… Things are good for me. (laughs)

QA: Is there a thought or an idea or something that guides you in your life that you would like to share with us?

Luna: Something that guides me? Well, I don’t know, I think, the very process of growing. Every day is something new, it is not the same. A long time ago I would have told you I had no idea, or I would mix and patch some phrases up, but essentially what guides me is the desire to live. I don’t want to survive life along the lines of: we’re all here, it’s the way it is, we all live life. No. I want to use every day to the fullest, to get something good out of it. Take this coffee with you now as an example. You see? I did something today. So, maybe, that’s what it’s about. Maybe one should live every day.

QA: Great. Luna, thanks a lot. Is there anything else you would like to share, something I forgot to ask?

Luna: Well, I don’t know. We’re recording this about coming out and those things, so… If this could come true, I just wish I had been born somewhere else. I wish it had been easier. I really wish things were easier for the youth these days. That they won’t have to go through the torture that some of us had gone through, because we can’t change where we live, you know. I don’t know. I mean, in some moments I was really scared for my life, I was really concerned about what would happen to me. Maybe if I continued to live in Italy, if I lived in America I wouldn’t be such a problem, because I would have something to protect me, I would feel safer. What I’m sorry about is that even though it’s the 21st century, it’s 2020, but still people will have to go through the same shit, unfortunately. So, maybe, that’s about it.

This story is part of a series of personal stories of LBTQ women about relationships, identities, sexuality and gender, feeling of belonging, creativity and work. Persons from the community share their thoughts related to these questions reflecting on the period before, during and after the war, as well as the current COVID-19 pandemic. Initiative supported by Feminist Review Trust Fund.